Breeding success in the Love Tub

The Oregon spotted frog is Canada’s most endangered frog. Without intervention it will almost certainly disappear. WPC Lead Biologist Andrea Gielens has been leading the team in  BC to save this frog through breeding and release to the wild to reestablish viable populations. The team is thrilled to report another successful breeding season! 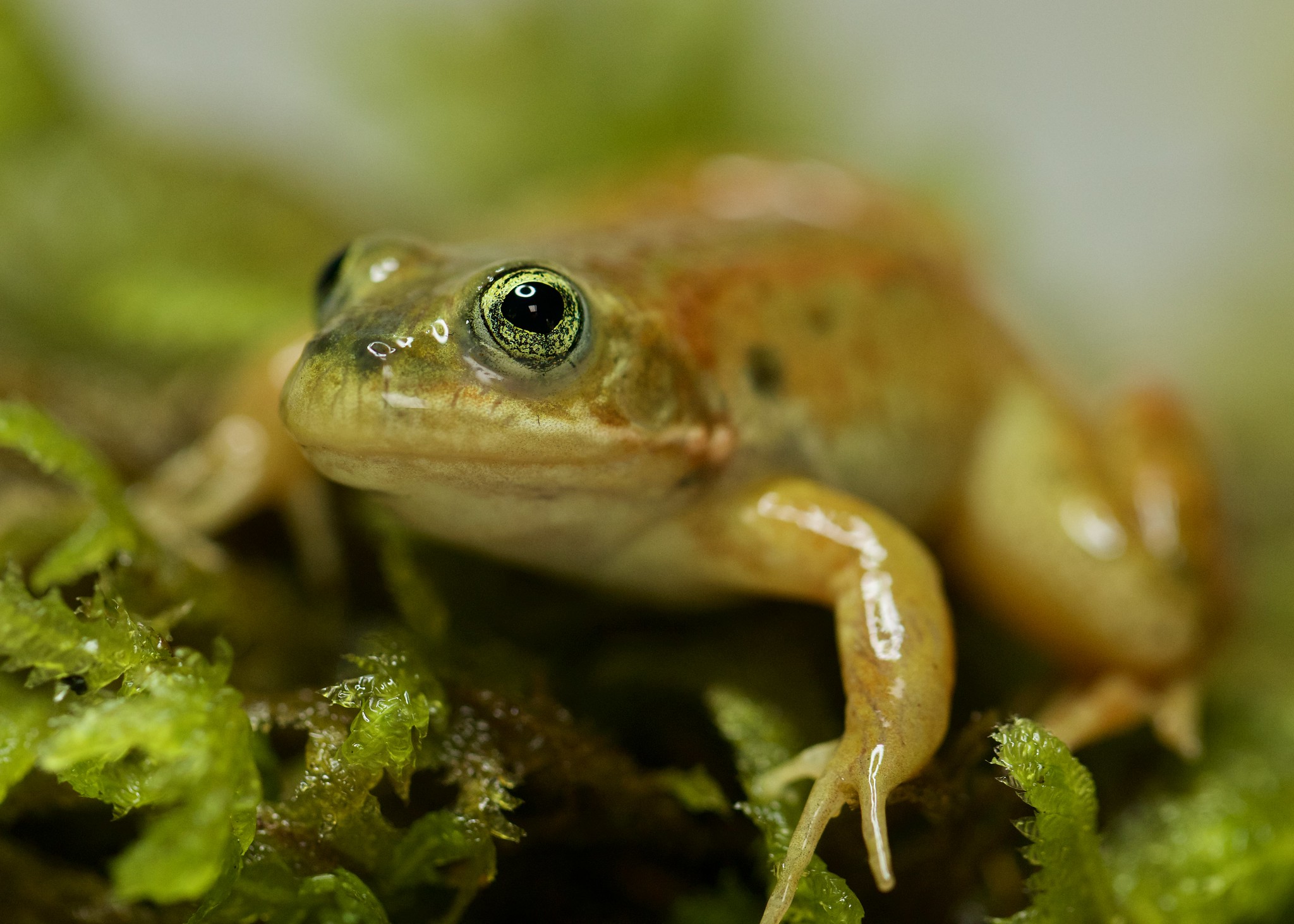 After last season’s great success, the Oregon spotted frog team waited for this rearing season with bated breath. In 2021 we had a record setting season, reaching a total of more than 20,541 tadpoles being released. We figured that we had finally cracked the secret of breeding this species; overwintering the males and females completely separately, introducing them later than we had by timing introductions with wild activity, and dropping the water level in the enclosures extremely low, providing shallow beds for laying on top of submerged moss.

We thought we had it figured out, but a one time win will not save a species.

So did we luck out? Did we lose our frog breeding mojo?

In February the frogs began to move and congregate in the wild and we took our cues from the field team reports that now was the time to play Love Island…or is that Love Tank? We moved the animals, dropped the water and set the mood. Amplexus (frog breeding position, like a combo amphibious hug and piggy back ride) occurred almost immediately, but this stage of the process has never been a problem. Oregon spotted frogs get into amplexus pretty readily. Our new method seems to really set the scene for the egg laying process and proper fertilization of the egg masses, which has been our challenging step.

As March seemed to get colder instead of warmer we were worried about timing and a possible false start. Prolonged amplexus can cause injury to the females. But unlike us weak mammals the frogs were not dissuaded and began laying eggs. As we saw in 2021, the frogs preferred to lay eggs in the tank that the females had overwintered in. Our graduate students are continuing to investigate reasons why that is exactly, but for now we just know that is what the frogs prefer.

As we cycled pairs of frogs through this “magic” tub they laid their eggs in quick succession. We ended up with 38-40 egg masses, a range because since OSF lay their eggs in congregation it’s sometimes hard to tell where one egg mass starts and one ends.

When egg laying was about half over nature decided – “Know what, I don’t think its cold enough, how about a freeze with about 1 inch of ice on the water, yes that will be lovely!” Spoiler alert, it was not lovely. Freezing events can cause severe damage to OSF egg masses that sit right at or partly above the water’s surface. We figured that this would impact the hatching success so we closely monitored development.

Despite the freeze, we saw excellent progression through developmental stages. There seemed to be some egg death due to the ice but not as much as we had anticipated. The cool weather this March compared to 2021 led to slow and steady development of tadpoles and we started the counting process. As we went through counting tadpoles we started to think we might be able to reach our previous year’s success again, which would be amazing. We grew more confident that we had found out how to produce enough tadpoles to effect real change in wild populations.

Then we kept counting…and counting.

We ended up breaking our record, which was already a ceiling shattering number.

Reminder if you haven’t been following our breeding saga, prior to 2021 a good year of tadpole breeding would be around 1500 tadpoles. We hope that as our breeding population of females continues to mature we can expect even more eggs to enable us to return even more frogs to the wild to save this species.

Andrea manages WPC’s captive breeding and release programs for the Oregon spotted frog and the coastal western painted turtle. Andrea has studied at-risk reptiles and amphibians in Canada and abroad, including a term at the Durrell Wildlife Conservation Trust in Jersey. Andrea also manages the Taylor’s checkerspot butterfly recovery program in BC.

Show your support for endangered animals today. Your gift will go directly to our work on the front line of animal conservation.