Conservation Biologists around the world have a lot to learn from each other. Jonathan Choquette, Lead Biologist of the Ojibway Prairie Reptile Recovery program, focusing on saving an endangered population of Eastern Massasauga rattlesnakes in southern Ontario, recently traveled to Hungary to visit a similar project now in its 25th year. Of special interest to Jonathan was the technique the Hungarian team developed for conservation translocations of an endangered viper.

I first learned about this work being conducted halfway across the world back in 2015, as I casually perused through a dusty booklet published by the International Union for the Conservation of Nature, which was neatly tucked away on the shelves of the WPC office in Guelph, Ontario. Since that time my curiosity was piqued, and I knew I wanted to visit the project and learn as much as I could.

“An example of the grassland habitat in the Great Hungarian Plain, between the Danube and Tisza Rivers, in central Hungary.” 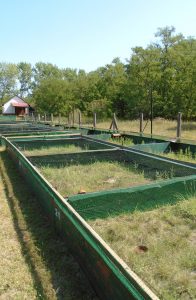 Well 2018 was the year it finally happened, and I have some good news to report: the conservation project is still alive and well, and nearing its 25th year of operation! Way back in 1993 work began to assess the status of the remaining wild Meadow Vipers in Hungary. Roughly 10 years later, in response to a critical need to augment the wild population, a captive breeding centre was born.

“Enclosures are designed to exclude predators, such as foxes, and each is designated for a specific purpose such as captive breeding, birthing, and raising of young snakes”

Over the past 15 years, hundreds of baby vipers were born under the protective enclosures of the centre, and raised for 3-4 years prior to release. In addition to maintaining a healthy captive breeding colony of about 30 pairs of adult snakes, the team releases 2-3 dozen head-started snakes per year to suitable habitat nearby and across the country! 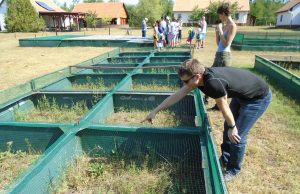 “The director of the conservation centre, Tamás Péchy, gives a presentation to a school group, while his daughter, Zita, tours us around the facility. Dr. Daniel Noble, my European travel companion and good friend, points out an adult Meadow Viper in an enclosure.”

“A baby Hungarian Meadow Viper born in 2018 at the centre.” 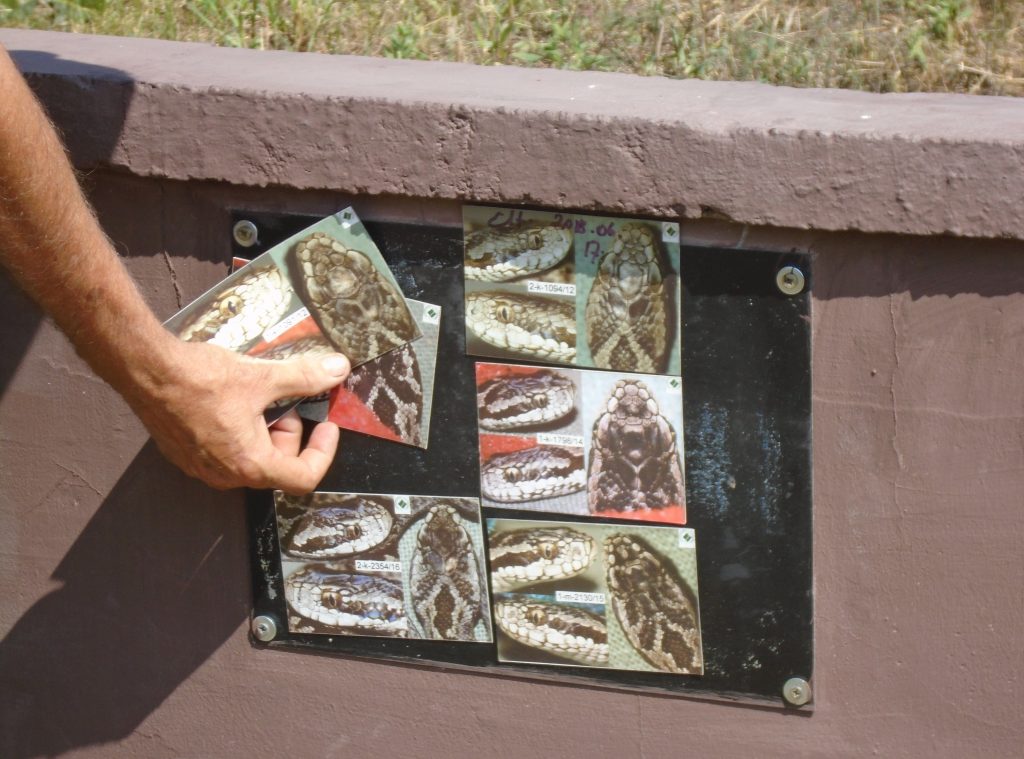 “Each snake is identified by its unique scale counts and colour pattern (like a finger print!) and given an individual identification card. These magnetic cards are affixed to the front of each enclosure to identify its occupants”

The one thing I was most interested in seeing was the technique they developed for conservation translocations: an artificial burrow design used at both the breeding centre and the release sites. The “burrow” consists of a segmented, chambered, clay pipe inserted into a wider plastic pipe (i.e., a “sleeve”) buried at a 30 degree angle into the ground. The artificial burrows, with the animals destined for translocation already inside, are simply slid out of the outer sleeve at the breeding centre and transported to the release location, where they are slid into a different outer sleeve at the site of release. A specially designed cap allows snake entry/exit of the burrow without getting stuck in the space between the burrow and outer sleeve. The snakes, being released in a familiar shelter, are free to make exploratory movements in their new territory and return the safety of their “home” burrow. Pretty amazing stuff!

” A single clay segment of the artificial burrow system developed by the team at the Hungarian Meadow Viper Conservation Centre. The small holes at the bottom are to allow moisture entry and ribs are to help the young snakes ascend the tube.”

“When assembled in a series, the segments are combined to create a ~1m long artificial burrow that is then inserted into a “sleeve” buried into the ground (opening visible to the right).”

And to top off an amazing visit, Tamás and Zita gave me an artificial burrow segment as a “souvenir”. This will come in very handy as a model to use on our conservation translocation work with Massasaugas at Ojibway Prairie. Well, I am thoroughly impressed and inspired by my visit to the Hungarian Meadow Viper Conservation Centre. But the story doesn’t end there! Our Hungarian colleagues have developed some short videos that highlight the key components of this conservation program: We are sharing these great videos on our YouTube channel! Be sure to check them out.

Thanks so much to Tamás and Zita for your time in showing us around the Centre, for answering my many questions, and for your inspiring conservation work! 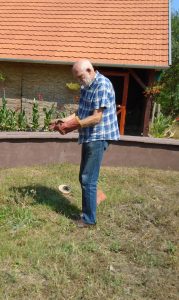 “A close-up of a Meadow Viper at the Hungarian Meadow Viper Conservation Centre. An artificial burrow, with cap in place, can be seen in the background.”