With October comes shorter days, cooler nights and a sudden onset of pumpkin spice cravings.  Many animals in BC’s lower mainland are enjoying this cooler weather and are preparing for the winter ahead. This includes the animals involved in the conservation program at the Greater Vancouver Zoo: Oregon spotted frogs, Taylor’s checkerspot butterflies and western painted turtles. All three of these species are endemic to North America, meaning they aren’t found anywhere else in the world. So how do they cope with the plummeting temperatures at this time of year? It’s clear that any species able to survive a Canadian winter must possess a very special set of adaptations!

At the Greater Vancouver Zoo we house a breeding population of Oregon spotted frogs that remain with us year-round. If you visited us at Conservation Corner over the summer, you will know the frogs are housed in large tubs filled with water, moss, duckweed and pond sludge. It is here that they will remain for the duration of winter. Soon, our team of conservation biologists will wrap these tubs in gutter wire and insulation to prevent the water from freezing solid. As the temperatures go down, we will start to notice the frogs becoming less active, surfacing less frequently to eat or bask. After some time they will fail to surface altogether and we will know they have entered their state of winter torpor. From this point, they will remain underwater, burrowed in the muddy sludge at the base of the tub. Their metabolism will have slowed so much that they will not need to resurface to eat or breathe for several weeks, until the first signs of spring. All across the lower mainland in ponds and sloughs, wild frogs, including the small population of wild Oregon spotted frogs, will be undergoing the same process.

The western painted turtles are a slightly different story. Here at the GVZ, all of the turtle hatchlings are housed in indoor pools, outfitted with UV lamps and heaters. Since the goal of the head starting program is to give these turtles the best possible chance of survival upon their release into the wild, the more time and opportunity they have to grow, the better. For this reason, though these turtles will hibernate in the wild, ours are kept in conditions such that they do not enter a state of hibernation. As a rule, we do not release turtles into the wild that are less than 30 grams. Because our hatchlings are awake, eating and active during the winter, they are able to reach this mass much faster than their wild compatriots. Once in the wild, their natural instincts are able to take over and they will enter their natural, seasonal cycle of activity and hibernation.

The Taylor’s checkerspot butterfly also takes Canadian winters in its stride. As is the case with all butterflies, checkerspots are a metamorphic species. Their “flight season”, or the time they spend as butterflies, is comprised of only a few weeks in early summer. During this time, it is their prerogative to consume nectar, mate and, in the case of females, lay eggs. It is these eggs that will develop into caterpillars that are uniquely equipped to survive over winter. In the wild, these caterpillars would find themselves clustered in groups, bundled and burrowed in debris such as leaves. At the GVZ, the caterpillars are housed in containers made cozy with bunches of paper towels. Stored inside, the caterpillars will be safe from predation, trampling and disease until they are ready to wake in the early spring. When they do, they will undergo a feeding frenzy before they form a cocoon and complete their transformation into butterflies.

At the GVZ we are thankful for the cooling temperatures as it gives us a chance to slow down and reflect on our busy and successful breeding season. With winter comes a whole new set of challenges. We are grateful, however, that those challenges do not include surviving at the bottom of a pond for months at a time *Sips pumpkin spice latte*. 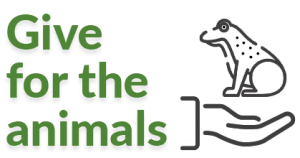