Since the launch of the Native Pollinator Initiative’s Bumble Bee Recovery program in 2013, we have collaborated with numerous partners internationally to develop and maintain a variety of native pollinator conservation projects, including: a conservation breeding program for the yellow-banded bumble bee, biodiversity monitoring, the Bumble Bee Watch community science database and targeted community science training programs utilizing it, public educational workshops, and piloting the use of artificial colony nest boxes as a conservation tool. Though many of our bumble bee recovery programs are based in Ontario, since 2016 we have been building relationships and expanding programs into Alberta as well, with goals of working with the western bumble bee in the future once we have developed reliable techniques for bumble bee conservation interventions.

We are currently developing techniques to establish conservation breeding colonies of at-risk native bumble bee species. Through rearing these bumble bees in captivity, we have the rare opportunity to observe all aspects of the colony life cycle up close and personal, allowing us to collect crucial data on the biology of the species so that we can develop a better understanding of potential reasons for their decline. Our ultimate goal is to safely reintroduce these bees into now-vacant areas of their historic range.

Originally, we focused our attention on the rusty-patched bumble bee. However, despite intensive annual searches throughout Ontario since 2012, our team has been unable to locate a single individual of this species. The last sighting occurred in 2009 at Pinery Provincial Park in southwestern Ontario. That’s why we turned our attention to the closely related yellow-banded bumble bee. Using this species as a surrogate, we are developing conservation breeding techniques that we can apply to the rusty-patched bumble bee if and when queens become available.

Conservation breeding efforts began in Ontario in 2014. Each spring, our team scours the province for yellow-banded queens that we use to try to establish breeding colonies. In order to establish managed colonies, wild queens must be collected as early as possible in the spring, before they have begun a colony in the wild. The queens are then provided with a nesting space in ideal conditions and fed regularly. If all goes well, they will first produce workers, then males, and then, finally, new queens. The males and new queens leave the colony to mate, and all but the new queens die off naturally: new fertilized queens will search for a place outside the colony to hibernate for the winter. These queens will then hopefully emerge to start colonies of their own in the spring.

Once we establish a self-sustaining population of disease-free colonies, we can begin developing strategies to release mated queens into suitable habitat to boost wild populations. Meanwhile, research with captive colonies has and continues to provide insights into threats facing wild populations, including impacts of pesticides, parasite levels, and changes in genetic variation.

To improve our understanding of bumble bee populations in Ontario, our staff conduct surveys of bumble bees all throughout the province – ranging from our southernmost sites in Norfolk County all the way up north to areas surrounding Thunder Bay.

From our surveys, conducted since 2013, we have observed that yellow-banded bumble bee populations appear to be more abundant further north in the province. Beginning in 2018, during intensive summer surveys both to collect yellow-banded bumble bee queens for conservation breeding and to monitor bumble bee biodiversity, we manage additional regional field crews to increase our survey coverage in these critical areas. Our main field crew works out of Guelph, and we have now added a spring crew based in Sudbury, and one based in Thunder Bay. With the help of additional staff, we hope to continue to collect baseline information on both populations that appear to be thriving (those north of Lake Superior) and populations that may be declining (certain southern populations) so that we can assess within which areas the yellow-banded bumble bee may become more critically threatened, in real time.

In 2014, we launched BumbleBeeWatch.org in collaboration with several partners. This website allows community scientists to help us locate populations of declining species, assess changes in population size and distribution, and track invasive species throughout North America – crucial information that will help shape our hands-on recovery work.

Starting in 2015, we have also developed and implemented an ever-expanding Bumble Bee Watch community science hands-on survey training program. This survey program engages the community in bumble bee conservation by teaching them the same survey techniques that professional researchers use, and provides them with the equipment and know-how to to independently monitor native bumble bees within our targeted locations throughout the summer. The first program developed takes place every year at Pinery Provincial Park near Grand Bend, Ontario, selected as it is the last known location of the rusty-patched bumble bee. Since then, we have expanded to host programs at multiple other locations in Ontario with known observations of species at risk, as well as a program at Glenbow Ranch Provincial Park near Calgary, Alberta: a known location of the western bumble bee. Thanks to the dedicated efforts of our trained community scientists, we have been able to record multiple additional observations of rare species at these sites.

In 2019, we expanded our BumbleBeeWatch.org volunteer community science program by engaging additional volunteers through our Train-the-Trainer program, which was first implemented in 2018. This program provides a one-day course and support throughout the bumble bee season for organizations and landowners who are interested in running their own volunteer-based programs using Bumble Bee Watch. Through this multi-leveled instruction program, we hope to expand search efforts across the country, growing our organizational capacity for training citizen scientists to locate and identify native bumble bees. If you are interested in launching a volunteer survey project in your area, please contact us.

The use of bumble bee colony nest boxes (sometimes referred to as artificial domiciles) to obtain or relocate colonies of bumble bees for research and crop pollination has been a common technique used by academics, mainly in western Canada and New Zealand. However, their potential use in conservation and for monitoring at-risk species is highly understudied. Since bumble bee nests are usually quite cryptic – most of us haven’t even encountered one unless they decided to nest in one of your abandoned bird boxes or under your deck! – using artificial boxes to study bumble bee colony growth and development in the field is a great alternative to trying to search for natural nesting sites. With minimal work done to-date on occupancy success for colony boxes in Ontario, and a lack of evaluation of their ability to help with data collection on bumble bee biology and distributions across Canada, we saw an opening!

Starting in 2017, we began a pilot project investigating the use of artificial nest boxes for conservation in locations specifically selected for historic observations of our target at-risk bumble bee species. Currently, through a project led by a graduate student at the University of Guelph, we have 400 nest boxes installed at multiple sites across Ontario

Meanwhile, conservation breeding of yellow-banded bumble bees has proven to be challenging. We had limited success in 2014 and 2015, but through constant refinement of our techniques we hit a major milestone in 2016, with our colonies producing their first new queens. In 2017, we experienced a major setback when what appears to be a pathogen outbreak took a huge toll on our lab population – we experienced higher than normal mortality in queens both before and after they had started colonies. However, despite these difficulties, we still managed to produce over quadruple the number of new queens of the previous year. We continued testing new methods in 2018 and 2019, and have experienced some success with productivity, but major success in preventing the spread of pathogens and parasites. We are continuing to work on refining and improving our husbandry techniques to achieve the highest success possible, including collaborating with new partners across North America. Full results after over four years of working with managed colonies are shown below.

Once our conservation breeding techniques are yielding satisfactory results, we will begin developing release methods to effectively boost wild yellow-banded bumble bee populations. We may also be able to use these techniques to return the rusty-patched bumble bee to its historic range in Ontario and Quebec, most likely by using queens from the United States.

Another option for using conservation breeding to help boost populations is the western bumble bee. However, disease concerns for working with this species are paramount – one possible cause of their sharp decline may be issues with high pathogen levels, potentially exacerbated by their former use in commercial breeding operations for greenhouse pollination. Raising the western bumble bee for greenhouse pollination has since been discontinued due to massive colony losses attributed to high pathogen loads. Thus, we may pursue alternative methods for intervening to help save the western bumble bee – including investigating the use of colony nest boxes for translocations of individuals from areas of higher density to areas within their range from which they have been lost. 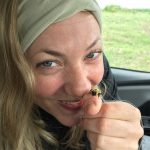 Genevieve joined the Native Pollinator Initiative as Ontario Program Coordinator in January 2018  and became Lead Biologist in August, managing the native pollinator recovery programs across Canada.
Genevieve has been working with species at-risk for nearly a decade in Canada and overseas. As a volunteer working with endangered lemurs in Madagascar, she was part of a program integrating hands-on conservation research with community outreach and education, and gained hands-on experience in Honduras with conservation breeding programs for critically endangered species working with the Utila spiny-tailed iguana recovery program.
However, it is her extensive experience with Canadian pollinators taxonomy and systematics, collection, and monitoring that makes her uniquely qualified to lead bumble bee recovery.
The primary focus of her Master’s degree at York University was to gain a better understanding of the habitat requirements and distribution of an important group of mason bees across North America, and included extensive fieldwork efforts in rare ecosystems across the country. She has developed an unrivaled network among Ontario, worked with, and continues working with, renowned experts in the fields of pollinator ecology, taxonomy and systematics, and has taken part in various species at-risk monitoring and recovery programs, both nationally and internationally. Genevieve looks forward to working to maintain Wildlife Preservation Canada’s current projects and expanding into new areas within the field of pollinator conservation.

WPC participated in a conservation planning workshop for the rusty patched bumble bee, one of North America’s most threatened pollinators and one of WPC’s focal species.  The workshop brought together a wide range of global bee conservation experts to evaluate and recommend conservation breeding and other ex situ strategies to complement existing recovery strategies in the wild for this endangered species.  The report highlights the critical importance of WPC’s leading efforts to develop conservation breeding techniques for threatened bumble bees.

Check out this stunning story map by WPC”s BumbleBeeWatch partners The Xerces Society.

How you can help:

MAKE A DONATION
VISIT OUR BLOG