Swallows of the Maritimes 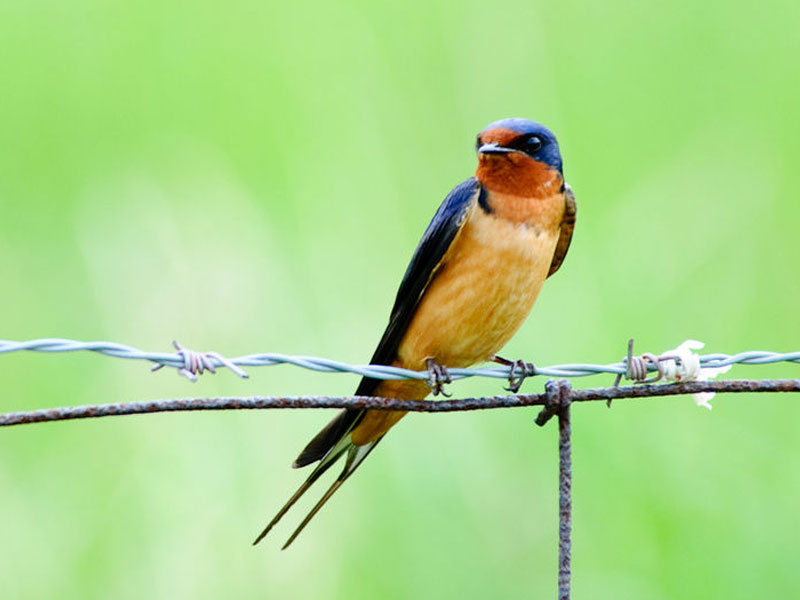 Swallows are aerial insectivores: birds that feed almost exclusively on insects while in flight. This group has experienced greater declines than any other group of birds in North America. In Canada, the trend is most severe in the Maritimes. Understanding the reasons for these declines is a key first step in recovery, guiding what further actions are needed.

In general, swallows are small, slender songbirds with short tails and long wings. In flight, they have a distinctive “arrow-like” shape, which lends itself to aerial acrobatics while catching insects. In the Maritimes — where we are focusing our work — you’ll find four species of swallows. Each species is named for its preferred nesting location: stream bank, human structure, cliff or tree.

Swallows are often associated with grasslands and agricultural fields, but they often forage over water as well. In many cases, the loss of natural nesting sites has led these species to use human-made or human-altered structures for nesting.

Bank swallow
Bank swallows commonly nest in the naturally eroding banks along rivers, streams and ocean coasts. As humans stabilize more of these banks, this species has adapted to using gravel and sand quarries, road banks and reservoirs. The male will use his bill, feet and wings to dig a burrow in the bank that leads to a nest chamber. The female then builds the nest with straw, grass, leaves and roots from the bank.

Barn swallow (pictured)
Barn swallows build cup-shaped nests out of mud, locating them in barns and sheds or under the eaves of buildings and bridges. They frequently reuse nests from past years — not surprising, since a pair of barn swallows must make over 1,000 trips to build a new nest, bringing back a mouthful of mud each time. Historically barn swallows used caves and cliff faces for nesting, however they quickly shifted to take advantage of human-made habitat. There are early records of barn swallows using First Nations wooden dwellings, and the diversity of potential nest sites and foraging habitat only grew following European settlement. Nowadays barn swallows nest almost exclusively in human-made structures.

Cliff swallow
Cliffs are the natural nesting habitats for the cliff swallow, but they will also nest under structures like buildings and bridges. In recent years, cliff swallows have also begun to opportunistically use barns, where they can out-compete barn swallows for the best nesting sites due to their larger size. They build gourd-shaped nests of mud and will even build on top of old barn swallow nests.

Tree swallow
Tree swallows build a cup-shaped nest of grass or pine needles in tree cavities. Tree swallows have also readily adapted to using nest boxes when natural sites are not available. Tree swallows may nest near one another, especially if several nest boxes are located close together, but they do not form colonies like other swallow species.

All four of these swallow species breed across most of North America, and different subspecies of the bank and barn swallow are also found in Europe and Asia. Tree swallows are short-distance migrants that overwinter in the southern U.S. and Central America, while barn and cliff swallows overwinter in South America. Bank swallows have a wide winter distribution across South and Central America, Mexico and the West Indies

While the reasons for the population declines have not been identified, swallow populations in Canada face a number of potential threats. These include changes in the availability of aerial insects — their main food source — during the breeding season, as well as habitat degradation along migrations routes and on wintering grounds.

Loss of breeding sites is also an important threat. In the case of the bank swallow, breakwaters that stabilize banks against erosion can destroy existing colonies and prevent birds from burrowing. In the case of the barn swallow, many old barns have been demolished or replaced with new barns that have metal roofs, which become too hot in the summer for nestlings. Converting abandoned, marginal farmland to forested conditions removes the open habitats these birds need for foraging.

Meanwhile, swallow nests on human structures like bridges and buildings are often destroyed during routine maintenance or because the droppings that accumulate beneath them are considered unsightly and may pose sanitary concerns.

Pesticide use is another problem, decreasing the abundance of aerial insects that swallows rely on. These chemicals can accumulate in the bodies of adult birds and their young, affecting health and reproduction. Climate change may also affect the availability of prey during the nesting period. Finally, human residences attract predators such as raccoons, rats, mice, squirrels and feral cats.

In 2011, the Committee on the Status of Endangered Wildlife in Canada (COSEWIC) assessed the barn swallow as Threatened. Ontario and Nova Scotia followed suit, officially designating the species as Threatened in Ontario in 2012 and Endangered in Nova Scotia in 2013. In 2014, the bank swallow joined the COSEWIC list and was listed as Threatened in Ontario. However, no recovery strategies have yet been developed federally or for the Maritime region. In the meantime, it is important to encourage stewardship, the protection and monitoring of important roost sites and research to fill knowledge gaps, as recommended by Ontario recovery documents.

What we are doing

Find out how Wildlife Preservation Canada helps save Canada’s birds, including Maritime swallows, and how you can make a difference!