2020 is a strange year for shrike too

While the human world is still reeling from the “new normal” of living through a pandemic, the eastern loggerhead shrikes on the Carden Alvar are having a very unusual year in several different ways.

WPC has been breeding and releasing endangered loggerhead shrike to historical areas to ensure these songbirds do not disappear. Conservation-bred and conservation-origin adults refers to shrikes which are bred at one of WPC’s partner organisations, released into the wild as juveniles in two locations in Ontario, Napanee and Carden, and have returned to Ontario to breed after migrating to overwinter in the eastern US.

Wild pairs with at least one conservation-bred adult usually produce up to 40% of the wild fledglings observed each year in Ontario.  This year, Napanee’s adult breeding population is composed of approximately 36% conservation-origin shrikes, which is in line with the yearly average.  Carden, however, has no conservation-origin shrikes and only one banded wild-origin bird.  The rest of the shrikes are un-banded, which makes identifying individuals and determining what stage of breeding they are in especially challenging. 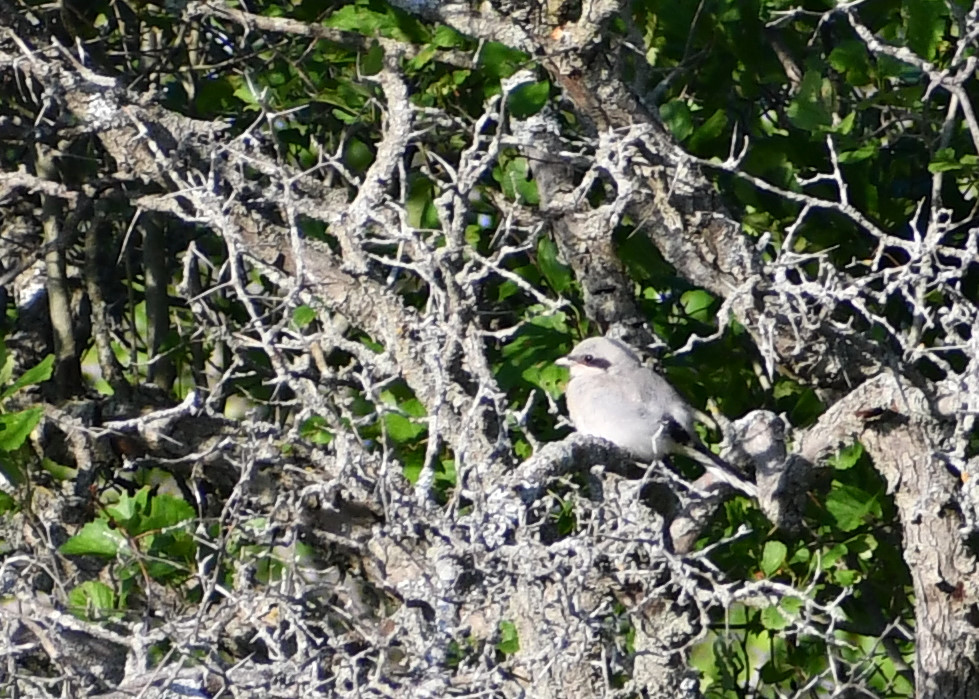 This juvenile shrike still has a pale pink beak which will darken to black in the upcoming weeks.

When even one adult in a pair is banded, you can generally deduce whether you are observing the male or female with a brief glimpse of their legs (and a brief glimpse is often all that you can hope to get).  This can provide insight into what the other mate is doing and the success of the pair.  For example, if you have a banded male paired with an un-banded female and you can see even one of the male’s four bands each time it caries food into a specific shrub, it is likely that he is feeding his mate who is incubating their eggs or possibly brooding young, naked nestlings.  For this same hypothetical pair, if you see both the banded male and un-banded female carrying food into the same shrub, then you can be certain that they are feeding nestlings and are past the incubation stage.  When you have a pair of shrikes where neither adult is banded, then it is often impossible to determine which adult is carrying food into the nest shrub and therefore what stage of development their eggs or chicks are in.

This scope-view photo is of an unusual case where the incubating female can be seen during monitoring.  The red circle is around the entire nest cup and the smaller blue circle is just around the hidden female’s head with her conspicuous black mask barely visible.

The eastern loggerhead shrikes in Carden have also been unusual in an exceptionally good way – unusually productive!  There are usually a few failed nests over the course of the season, generally as a result of predation, but I have been fortunate not to have seen any this year!  One pair I am monitoring likely had a failed nest before I found them, as their eggs only hatched this week and chicks from all other pairs are nearly independent which happens at about 1.5 months of age.  Another pair has raised their first brood of chicks to independence and started on a second clutch – a rare occurrence in Canada because of our relatively short breeding season!  I hope that the rest of 2020 continues to be unusual in a good way for our shrikes and for all of you supporting Wildlife Preservation Canada’s conservation efforts.

This adult male is singing from the top of the tree which contains his second nest.  Singing is an important part of courtship and claiming a territory, but is rarely heard.

Alisa is a conservation ornithologist specializing in loggerhead shrike and has returned to Carden after a season with WPC in 2017.  She has worked with endangered avian species across North America from James Bay to Southern California, where she spent most of 2019 working with the island endemic San Clemente loggerhead shrike.  Alisa is a PhD candidate at Queen’s University researching the genetics of migratory urge in loggerhead shrike under the supervision of Dr. Amy Chabot and Prof. Vicki Friesen.